Exacad's mission is to create and implement clever solutions perfectly adapted to the unicity of your plastic injection molding projects. Highly skilled in developing and integrating advanced technologies for the manufacturing of single material or multi-shot plastic injection molds, we contribute to the long-term profitability and success of your projects.

Remain the reference in setting up optimal molding solutions. Create for you what others cannot even imagine !

Beyond productivity, our involvement for the lasting success of your projects. This translates into shared responsibilities fostering the development of competencies and personal relationships.

Our passion, your projects! Inspired, dedicated and competent, Exacad develops for you cutting edge technologies guided by Eco design principles. That is how we contribute to the improvement of your overall production performance.

Lead by François Tremblay, our team of 20 experimented individuals share their competencies and ingenuity to create and deliver tooling to meet your high expectations. Their collaboration creates a stimulating work environment, unique to Exacad!

Exacad will celebrate 20 years of presence and commitment to its customers.

More active than ever, Exacad refreshes its Website and unveils its new visual identity.

Exacad is proud to be once again nominated for the award Prix PME Banque Nationale 2015 in the category Exportation — The unveiling of the winner will take place in May 2015.

Extension of our services throughout the Northeastern part of the United States delivering multi-shot plastic injection molds to Ohio — Currently, other molds are being manufactured for US and Canadian customers interested by our technologies.

demonstration of one of our realizations: a plastic injection mold with an

Design and implementation of a fully automated multi-material in-house plastic injection molding station which enabled the reshoring of an entire product line from Asia to the United States.

Winner of the Honoris Innova Laureate in the Sustainable development — Innovative Product category.

A technical collaboration agreement is concluded between Exacad and Ermo France — Our skills and knowledge being recognized throughout numerous North American customers, we wanted to move further ahead.

Exacad gives workshops and conferences on the design and manufacturing of molds, and on plastic injection molding processes.

Winner of the 2000 Edition of the award Prix PME Banque Nationale for the Laval/North-shore region and of the Special Mention for its exportation activities, Exacad is recognized as a company on the cutting edge of technology.

Exacad starts its activities with the manufacturing of a baseball helmet plastic injection mold — We are proud to participate to the economic growth of our region and to contribute to the development of individuals by creating valuable employment opportunities. Exacad economic implication is recognized as the company receives the SODET 1995 Investment award, in the Young Entrepreneur category. 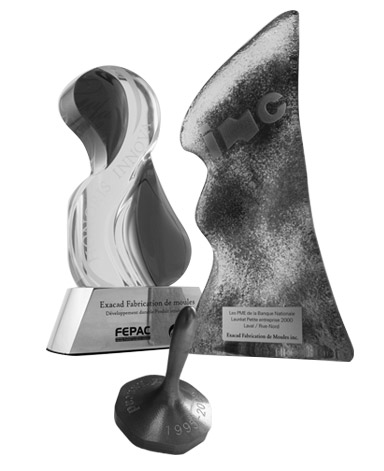